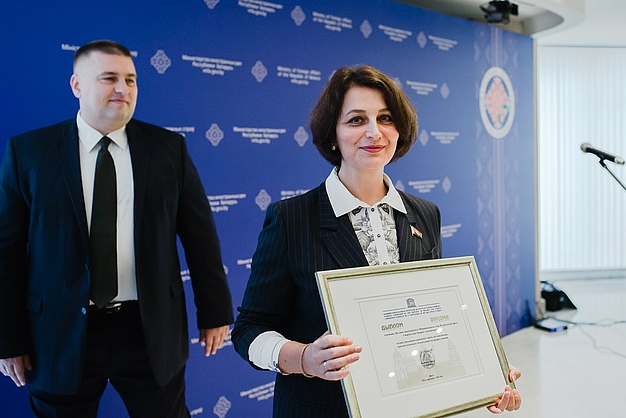 Vitebsk became the first Belarusian city that joined to UNESCO Global Network of Learning Cities. This was announced on October 18 during the ceremony at the Ministry of Foreign Affairs of the Republic of Belarus.

After welcoming remarks by Deputy Foreign Minister of Belarus Oleg Kravchenko, board member of the UNESCO Institute of Lifelong Learning, Choi Unsil presented the Chairman of the Vitebsk City Executive Committee, Viktor Nikolaykin, with the Certificate of Accession of Vitebsk to the UNESCO Global Network of Learning Cities.

A few years ago, Vitebsk region was the first where DVV International presented the pilot project “Learning Region: Education for All Generations”. The project introduced citizens with the concept of a “learning region / city” and shared the practices for organizing lifelong learning. The interest in non-formal education is also confirmed by the experience of the People’s Social University, which opened in Vitebsk in 2015 on the basis of the Territorial center for social services for the Pervomaisky district residents.

The National Commission for UNESCO awarded those who helped Vitebsk in this matter with diplomas the for their active work. Oleg Kravchenko awarded Galina Veremeychik, the head of the German Association of Peoples' Universities representative office in the Republic of Belarus for an important contribution to the expansion of a culture of education throughout life in Belarus and the development of international cooperation in this field. He also awarded Tatiana Starinskaya, the Member of the House of Representatives of the National Assembly of the Republic of Belarus, for popularizing the concept of a learning city and spreading the ideas of lifelong education.

The UNESCO Global Network of Learning Cities was created to encourage the development of cities by introducing the practice of lifelong learning. Such cities and communities participate in international policy dialogue, experimental research, capacity building and mutual exchange of experience, effectively using the methods of the learning cities to ensure access of their residents to lifelong learning.

The network operates under the auspices of the UNESCO Institute for Lifelong Learning (Hamburg, Germany) and brings together the cities from more than 50 countries of the world. Among the neighbors of Belarus, there are learning cities in Russia, Latvia, Lithuania and Ukraine.

We hope that in the future other cities of our country will join the UNESCO Global Network of Learning Cities.