The Award Ceremony for the winners of the Ukrainian history competition "Soviet Past: Rethinking History" took place. 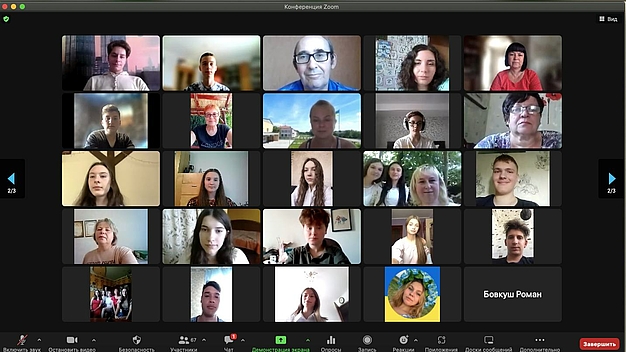 On June 28, 2022, the Award Ceremony for the winners of the Ukrainian history competition "Soviet Past: Rethinking History" took place. More than 70 participants from different regions of Ukraine joined the event. Organizers announced the competition rating and prize places.

In total, the Jury received 65 collective entries. After a two-stage review and evaluation, the Jury selected 27 winners. Seven works won first place, nine – second, and 11 – third. The list of winners and points from the Jury is available via the link.

Katharina Schaupp-Karmann, head of the Department of Culture, Education and National Minorities of the German Embassy in Ukraine, congratulated the winners. She noted the incredible motivation of young researchers who, despite the war, managed to complete their entries.

At the heart of the ceremony was a panel where representatives of the winning teams shared their research experiences. The competition's first deadline – March 1 – coincided with the start of a full-scale Russian war. Many participants noted how difficult it had been for them to complete their research and submit it to the competition. The war prompted many participants to approach the Soviet totalitarian past as a source of the current Russian aggressive chauvinism and crimes against humanity.

Many participants from the temporarily occupied territories joined the ceremony. Most of them had moved to other regions of Ukraine or abroad. But there were also those few who joined the event from the occupation zone – their desire to see their peers outweighed fears of possible persecution.

The jury members confided how difficult it was for them to rate the competition entries against the backdrop of war. Liudmyla Makhun praised the entries' originality. According to her, these entries had been unique and submitted only to "Soviet Past: Rethinking History."

Ella Sytnyk added that compared to the previous competition, the research focus of students has changed. Rather than immersing the reader in the historical period, they sought to reflect on the inner state of soviet citizens. "A crucial aspect of these entries was this empathizing with the witnesses of history," she says.

"Judging by these entries, I can say that Soviet past begins to pass," – summarized Heorhiy Kasianov, hinting at the widely known observation that the Soviet past is a past that refuses to pass away. In his opinion, despite being uncritically nostalgic sometimes or vice versa, the student research entries demonstrate a high critical approach toward the historical sources.

The competition runs in the framework of the cooperation project "Between Rejection and Nostalgia: Soviet and Post-Soviet History in Families and Local Communities," which is implemented by the Institute for International Cooperation of the German Adult Education Association (DVV International) in cooperation with Körber-Stiftung with the financial support of the Federal Foreign Office of Germany. It is currently running in Armenia, Georgia, Moldova, and Ukraine. Read more here.