The organizing committee of the competition has received 65 submissions from 282 young people. 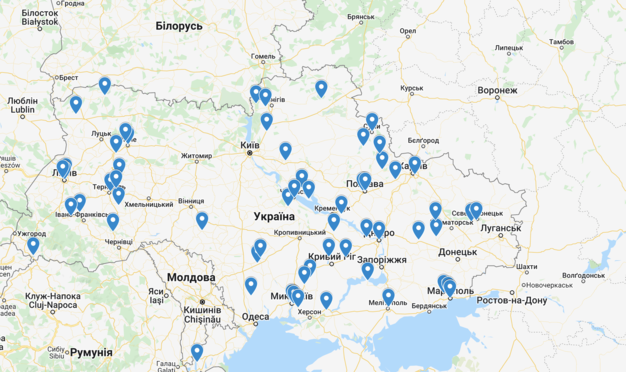 On May 15, 2022, the project "Soviet Past: Rethinking History" stopped accepting competition entries. Despite the Russian war against Ukraine, the organizing committee has received 65 submissions from 282 young people.

Due to the active warfare, the organizing committee had to postpone the deadline for entry submission twice – first to March 31 and finally to May 15. This move allowed several student teams to complete their research and prepare a competition paper. After the beginning of the Russian invasion, the organizing committee received eight entries – some of them from the regions directly affected by the war.

"Many of these works came to us after February 24. And this testifies to the incredible dedication of teachers and students to their work, their principles, and it can not fail to impress," - said the organizers.

The Organizing Committee has prepared a map showing from which regions of Ukraine the entries come from.

"When you look at this map, you feel a mixture of sadness, fear for those who found themselves amidst the hell of war, and, at the same time, pride and admiration," - said Andrii Fert, the project coordinator.

A professional jury of well-known historians, teachers, and journalists will consider the works submitted to the competition. Read more about the Jury here.

This project is the second competition dedicated to the Soviet past organized jointly by DVV International Ukraine and the All-Ukrainian Association of History Teachers "Nova Doba." The previous competition (2019-2020) received 290 entries. Read more here. Drawing on the best entries, the organizers created a textbook for schools "How to Work With the Soviet Past at School?".

The competition runs in the framework of the cooperation project "Between Rejection and Nostalgia: Soviet and Post-Soviet History in Families and Local Communities," which is implemented by the Institute for International Cooperation of the German Adult Education Association (DVV International) in cooperation with Körber-Stiftung with the financial support of the Federal Foreign Office of Germany. It is currently running in Armenia, Georgia, Moldova, and Ukraine. Read more here.