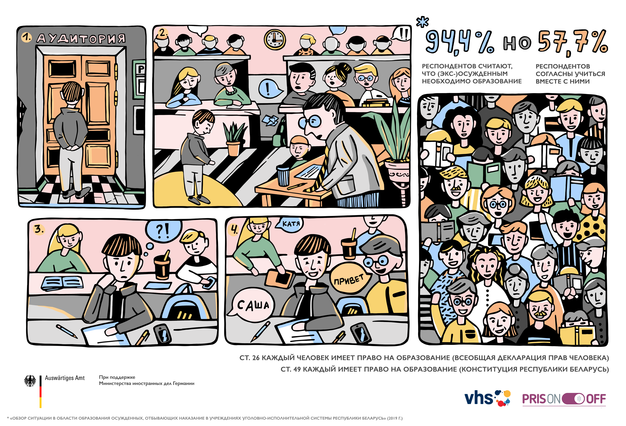 International Prison Education Day was established by the European Prison Education Association six years ago to mark the 25th anniversary of the Council of Europe's adoption of a set of recommendations outlining the needs and responsibilities for prison education in Europe.

The European Convention for the Protection of Human Rights and Fundamental Freedoms, adopted back in 1950, proclaimed that no one shall be denied the right to education.

The DVVI Representative Office in Belarus, together with its partners, has been dealing with the topic of education of convicts and released persons for many years. Over the years, research has been conducted, and various pilot projects have been launched, including higher education in correctional facilities. For example, on October 13, 2017 the first in the history of Belarus diploma of higher education was handed over to the Department of Corrections of the Ministry of Internal Affairs of the Republic of Belarus in Gomel region.

Despite the fact that many people recognize the right of convicted and released persons to receive education, our surveys show that they are not yet ready to study together with this category of citizens, to assist them in finding a job, etc. The projects of our partners, which we support, are aimed at realizing the right to education in correctional institutions, as well as to change the public attitude towards convicts and released persons.

Education in prisons not only reduces recidivism, financial and social costs and the risk of repeat offenses, but also gives convicts the opportunity to overcome their disadvantages, build a new life and make a full contribution to society. Let us be attentive to each other, through education can change a lot.

print
YOU ARE LEAVING DVV INTERNATIONAL
Important notice: If you click on this link, you will leave the websites of DVV International. DVV International is not responsible for the content of third party websites that can be accessed through links. DVV International has no influence as to which personal data of yours is accessed and/or processed on those sites. For more information, please review the privacy policy of the external website provider.